He launched when I was four. I remember riding in Mother's car to the Cape, watching the rocket rise into the sky on top of that impossibly bright light, and covering my ears and crying because of the noise.

We'd get video messages every week like clockwork for a long time, personal messages he recorded for Mother and me, and we'd watch them curled up together on the couch. Then men in uniforms came and told Mother there wouldn't be any more, and she cried, and later that same day we moved in with Grandma.

He's still up there, somewhere.

She looked around: there were other beings nearby, but they were all in motion or in conversation, difficult to interrupt, and there were no spaceport employees anywhere to be seen. She wore her most pathetic face, hoping the alien could even read human expressions. "I'm really sorry…"

"I'm not sure, there's just this symbol…"

"That is a Polixaci trade glyph. If you travel on liners, should learn to read them. That way, three gates down."

What Became Of Michael Scissors

The gun was shoved into his waistband, the address was scratched in black ink onto the inside of a matchbook cover, the sun was dying on the horizon. It was finally time.

There are parts of L.A. that you don't go during the day, because they're not there yet. The buildings are, the streets, the addresses; but they're not themselves. They only become themselves in under the buzzing streetlamps, in the shadows between them, in the corners and alleyways out of their reach. He was going to one such place, one he'd been before and sworn to never go again.

"You're an idiot, Happy," he muttered as he turned the key in the ignition. "You've always been an idiot."

He drove through the thinning traffic, watching for tails, making random turns, pulling last-second U-turns, cursing and blessing his paranoia. He was almost certain he'd lost whoever or whatever had been following him by the time he reached the address.

Once upon a time, the Mob ran the Nondescript. They'd been bought out or scared off, likely the latter. He parked, he looked around, he pulled the gun out of his belt and checked to make sure there was a round in the chamber.

In the old days, there would have been a bouncer working the door to keep troublemakers out, big guy, the sort that never has to show you his gun to get your respect; the stool outside the Nondescript was ostentatiously empty.

Hap was out of the car, walking with a purpose, head down, right hand heavy in his suit pocket. The neon sign was dark, but there were lights inside. He didn't figure on knocking; he burst in without breaking stride, scanned the room, found her.

Aulia. She was impossible to miss: skin-tight red dress slit up the side, plunging neckline. He had the gun out and up and pointed at her before he realized that there were other people in the place, men sitting at tables, men no doubt with guns of their own. "What did you do to Mikey Scissors?"

The woman looked at him coolly, with a detached disregard that made the hairs on the back of his neck stand on end. After a moment, Hap realized that the men — Aulia's men, the goons at the tables — hadn't moved, hadn't stood, hadn't drawn their guns. She smiled. "You'd better come back to my office."

There was a snicker from somewhere behind him and to the left. Aulia turned and walked towards the back, not looking to see if Hap was complying or curling his finger tighter around the trigger. She's not afraid of me. None of them are. It was an act of will to lower the gun and follow.

The office was ornate and stylish and smelled of sex and ashes. "Please sit down." She made her way behind the desk and sat. "I'm not sure how much you know, so I'll have to start at the beginning. How are you acquainted with Michael?"

Mikey Scissors, small-time bookie and sometimes informant. "I arrested him a couple times, when I was a cop."

"And now you're a private detective." It wasn't a question. "More lucrative? Better hours."

He wasn't in the mood for jokes, and the adrenaline was starting to make him jumpy. "I saw Mikey burning to death, and you were there. Now—"

She smiled. "Things aren't always what they appear, Mister Dash. I didn't kill Michael, he's very much alive. He works for me."

She fished a cigarette out of slim silver case that snapped shut between her fingers. She put it to her lips already lit, as if it had been burning in the case. "You were with the police for eight years, you know at least part of the score. Yes?"

"You have to fill out paperwork. It must be frustrating, yes? So much unexplained. I'd think it'd be worse for the coroner, of course."

"Aulia. I belong to one of four factions, factions that use magic. Each faction's focus — its fealty, if you will — is to one of the four schools of magic, centered on the four classical elements: earth, water, air, and fire. You've seen that silly children's show?"

"Sure. My niece watches it."

"It's ridiculous fluff, of course, but that's the basic idea. There's some areas of overlap, and we can cooperate in those areas when we choose, but the reality is most of the time we barely tolerate each other. The Fire and Water factions, for example, have been in a feud for longer than you've been alive."

"We kill one of them, they kill two of us, we burn down a building, they flood a town. It's all we can do to keep it from getting truly out of hand. But I'm not telling you anything you don't already know. Not really."

How many unexplained drownings? How many cases of spontaneous human combustion? That man in the easy chair, only his arms intact. The woman in the tub, the bone-dry tub, lungs full of water. 'I'd think it'd be worse for the coroner', she'd said. Goddammit. "Mikey. He was… water?"

"No. I already told you, Mister Dash. He's fire. He works for me. What did you see?"

"He was standing there. Two guys, one on either side. You walked up, they backed away. You held up your hand, and…"

"And he burst into flame."

"Like oilmen burning off a wellhead." Hap shuddered. He'd run, he'd left the car where he'd parked it and ran eight blocks, until he was sure it was safe to walk.

Aulia smiled, pushed a button on the intercom. "You can send him back now." After a moment, the door behind Hap swung open and…

Mikey Scissors, grinning. "How are ya, Hap? Good?" 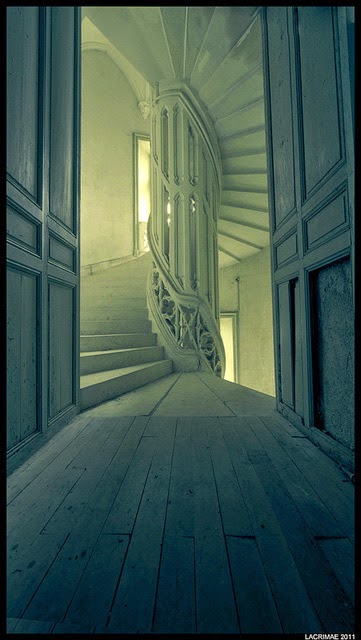 He looked up the spiral staircase, listened, heard nothing. He glanced down at the postcard, blank but for this address, and turned back to the butler with a worried look. "Why am I here?

"Who is the lady of the house? What does she want with me?"

He had one foot on the lowest step, as if of its own accord. His hand reached out for the railing.

"What's the worst that could happen, sir?"