That's where I stood and waited, for you and him,
Where we always said we'd go together as a family,
So it would be true, if only for a moment.

I've never been dead before.

Pete's been dead seventeen years; he says to relax, take some time and figure it all out. Aoibheann's been dead nearly a thousand; she stares through you, says nothing, then gets startled when she notices you're there. She reaches out, tries to touch your face, and then when she can't she goes back into her head. Pete says she was like this when she got here, but how would he know? Maybe there were others who knew, and they told him, but then where are they now?

I wish I knew the rules. I wish I had my ipod, and my headphones, the nice ones, the Beats. I wish there I wish I knew whether Cribs lived, he was in the passenger's seat. If he didn't, would he be here? Pete doesn't know.

I don't get wet, but I still wish it would stop raining. 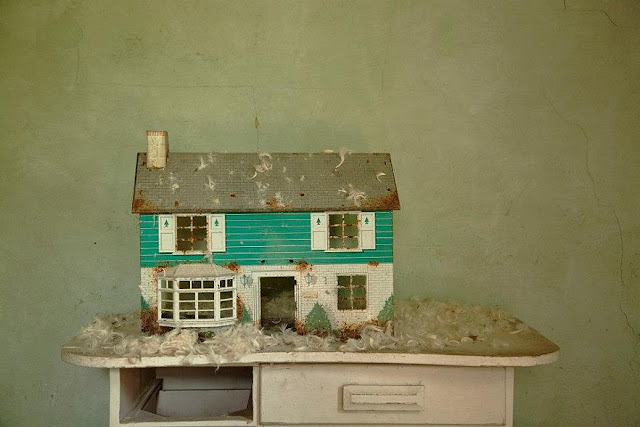 Half-collapsed houses everywhere, broken windows and sagging roofs letting in twenty years of leaves and rain. Never anything good in the cupboards, not anymore: picked clean ages ago, or spoiled. Don't hardly go in anymore, not safe. Except sometimes, looking for clothes.

The kids' rooms are the worst, even when the kids are long gone, not even bones left.  Toys all over the floor, drawers pulled out, bed crooked and linens soaked and rotted to a sickly brown, mushrooms growing in the corner. Just seems wrong, more wrong. I want to clean them up, but of course I never do.