Something happened in there, long time ago, before you were born. Not gonna tell you what, not even when you're older.

Forest grew right up to the house, because nobody would come around to clear it. But as soon as it got there, it started to pull away, recoil. The roots of the trees pulled the earth with them as they went. Only the vines'll touch it. Maybe they're too dumb, maybe they just don't care. Maybe the vines are the forest's way of protecting itself, squeeze the place until it crumbles to pieces. Hope so.

"What'll you have, sweetie?"

"Coffee." He ran a hand through his hair. "And maybe some pie?"

She brought him the cup and saucer, pushed over the caddy containing packets of sugar and cream. A police car pulled up outside while she poured, then another, and then two more. She finally noticed the pistol in his belt. "They here for you?"

He looked over his shoulder. "Yeah."

"They'll have the back covered too."

"It's for you." He tore open a sugar packet. "Go on. But bring me that piece of pie first."

Zombie Drabble #427 "On The Street Where You Live"

There's a wood-panel station wagon with the front end up on the grass in Mr. Carey's yard, with one broken window where they'd finally forced their way through to get to eat some lady who'd spent seven hours in terror. There's papers — school papers, loose-leaf — blowing around in little tempests impatient for the rain to weld them to the concrete. There's blue and red glass in shards, down by the stop sign, from a police cruiser that didn't stay long. There's most of a body on the sidewalk over by the mailboxes.

I Am Whatever You Say I Am 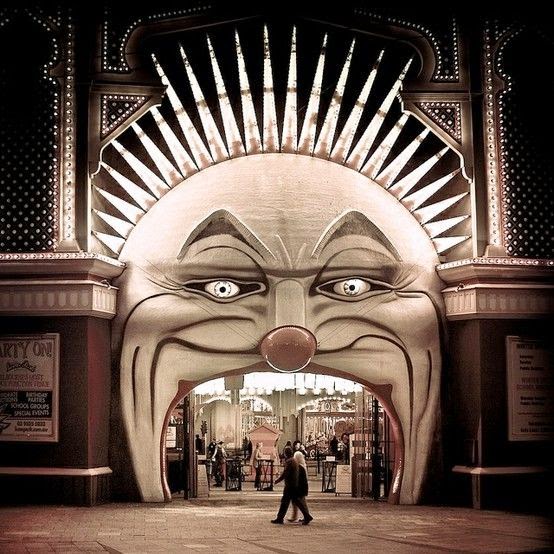 "Where's he got to now," she panted before again calling out, "Harry!"

"What about over there?"

"The clown-face thing. What is that, a casino? I mean, look at it, maybe he thought it was an arcade or—"

"What are you talking about, John?"

"Right there, are you blind? The big clown face with the lights. If I was six, I'd totally see that and want to go in."

She glared at him like he was out of his mind. "There's no clown face, John, no lights. It's a warehouse. It's boarded up. I can't believe you're making jokes right now." She hurried off, looking around as she went. "Harry!"

He closed his eyes, opened them. The face remained an enticing beacon in the hazy boardwalk night. "He's in there. I'll bet anything he's in there. I'd bet anything." He checked for his wallet before walking towards the open mouth.