Eventually, she turned around, crossed her arms, and called out, “Hello? Can I help you?”

The figure froze in the no-man’s-land between street lamps. Somewhere, a block or two over, a dog barked twice, three times.

The figure again said nothing. It took a step forward, then another.

I’d be hearing a human’s thoughts by now. She pulled out her weapon and waved an emerald-green laser beam across the figure’s chest. It fell to the sidewalk with a thud. She walked over, looked down at the body, muttered, “Where’d you park your ship?”

The drill stopped the unnatural shuddering and started rising out of the bore-hole. Before it was all the way up, reddish brown liquid began spraying out at the edges, then seeping out as the bit cleared the rim.

Someone called from above, “What the hell?”

The rig shuddered like in a mild earthquake, then lurched suddenly, almost throwing Red off his feet. He yelled up, “Remember that crazy-ass scientist who told us not to drill here?”

“Still got his number?”

I’m always the first responder to a threat event site. Always. I run fast. Only Raijin ever beat me anywhere, and it was only the once, and it was because he could teleport and had nothing better to do that day. But this time I was out of position, looking for Critical Hit in Vegas, when another ‘pillbug’ appeared in LA and started making its way up Maple towards downtown. So even though I ran full-tilt the whole way as soon as I got the alert, anybody who happened to be in LA and even some of the people from headquarters beat me there.

I came to a halt in the street next to where the Knack was standing perfectly still, AXMC rifle trained on the alien creature, which was a block away alternatively roaring and chewing on a DASH bus. “I’m here.”

“Kid, I’m tryin’ to concentrate.” He fired, and a spurt of green and brown goo erupted from the creature’s face, just to the left of its eye. “Fuck.”

“I dunno, kid. What do you usually do? Ask the big guy.” He pointed his grappling gun at the top of the Bendix building, fired it, and pulled up and away. He called behind him, “And watch your ass!”

I was a blur harrying its knees, its shins, it’s clawed feet. It pounded the ground where I had been a second ago. It screamed and it spat bile that started eating through my D1-designed running shoes and it started ignoring the others.

I recognized grey spears made of pulverized asphalt and cement striking the creature’s carapace, the debris raining down around me: Rapture’s work. I saw bolts of intensely bright solar energy follow, aimed at the same spots: Glowworm’s work. Together they were trying to pierce the pillbug’s defensive shell while its unprotected face was downturned. Somewhere above, the Knack held fire and waited for an opportunity; so far, he’d been the only one to actually hurt the thing.

When I’m running flat-out, everyone around me is a statue; when I’m sprinting, stopping, sprinting again, I experience short moments of a moving world sandwiched between still images. Massive charging full-tilt up the street behind me and winding up for a punch was like someone repeatedly mashing the pause button on an action movie. I had enough sense to get out of the way.

Massive delivered a punch to the bottom of the pillbug’s jaw as he leapt into the air, his entire bodyweight lent to the follow-through. The creature’s head snapped back with a deafening crack, and its mouth opened to scream.

It didn’t get the chance: the Knack obliterated its left eye with a .338 round. Before it could react to that pain, Rapture and Glowworm sent their powerful attacks down its throat. All the above while Massive was still in the air. The pillbug fell backward with a crunch, peppering the buildings to either side with dust and gravel, blowing out any windows that had remained intact.

I was still catching my breath when the Knack’s grappling hook cable deposited him beside me. “Not bad, kid. Glad you showed up.”

“Price of doing business.” He raised a palm to shield his eyes.

Glowworm, when he’s fully charged up, is as bright as the sun. Walking towards us through the wreckage of Maple Avenue, his radiance was already fading; by the time he spoke he was a run-of-the-mill, balding, bespectacled dentist. “That’s the third one since the funeral, Sonny.”

Raijin was the original cape, the first one. He’d been around since the fifties in secret, known only to the government, a crime-fighting Area 51 kind of deal. It was only in the eighties, when powered bad guys started showing up, that he’d revealed himself to the general public. We’d needed a standard-bearer, and Raijin — mysterious and exotic though he may have been — was it. His group founded Dreamland, and funded the design of a threat-analysis computer that eventually re-designed itself and became Dreamland One. That group also became the first ‘A Team’, with Raijin at its center, its leader.

But he’d come back from Pa Reh a changed man, assuming he had really been a man to begin with. Along with the rest of us, he’d fought one of the Sagittarian Gods before — a relatively minor example — here on Earth, but going up against one of the strongest of them on its own home ground had seemed to take the fight out of him. Raijin went home to his private island in Micronesia, and stopped answering Dreamland’s alerts, and the next thing I heard, he was gone.

“Could it be related?”

McLeary shrugged, shifted his weight in the wheelchair, looked at Rapture and then back at me. “How?”

“I don’t know. A week after Raijin dies, one of these things attacks that village in Peru. Five days after that, one appears outside Avignon. Now this one, and it’s only Wednesday. Which means the next one is coming Friday, and—”

“You don’t know there will be a next one.”

“Wanna put money on it? Where are they coming from?”

“We haven’t found any holes, so they’re not coming out of the ground. Nothing tracked in the air. D1 is looking at camera footage. All of it, from all over L.A, according to Seabring.”

Rapture looked offended. “What do you mean, ‘according to Seabring’, aren’t you back in charge?”

“I’m consulting. I’m…” He sighed. “It’s an emeritus position. It’s fine. I still don’t feel up to field work, and Seabring’s good. Chowdhury and Mandy both signed off on the arrangement. And so do I. Let it be.”

Rapture said, in a tone meaning that the subject would come up again, “Fine. But Raijin—”

“I don’t know if it’s related. There’s so much about him, his power, that we didn’t understand. Maybe his being alive, being here, was keeping these things away somehow. Maybe now that he’s passed, they think it’s safe to come. That’s just speculation.” McLeary turned the wheels of his chair in opposition, spinning around to point back down the hall. “Chowdhury’s autopsying the corpse now, maybe we’ll learn something from that. Until then, don’t get too comfortable.”

I went to our apartment. Portland Drew was on the couch, watching something on a smartphone, both earbuds in. She didn’t look up. “Everybody’s asleep.”

Meaning four-year-old Junior went down for a nap and Mandy took the opportunity to do likewise. “Okay. How’s things here?”

“No giant bug monsters.” She looked around theatrically. “So far, anyway.”

“I could have saved the people on the bus. Just so you know. Slow down the fall. Land it like a feather.”

You’re not supposed to watch the Dreamland tactical feed. “Rules are rules, Portland.”

“Good rules keep people from getting killed.” She was preaching to the choir, and she knew it, but we’d agreed to a unified front, me, Mandy, Dreamland One. Portland is off the board until she’s older, no exceptions. She wouldn’t look at me. “Anyway, naptime.”

The voice was familiar. He turned, found himself face-to-face with Polly, who he hadn’t seen since landing day. Not ‘Landing Day’, the anniversary, which was six weeks ago, but the landing day, the first one. She’d been loading canvas bags onto a rollaround, one of the biggest ones, and had winked at him as he passed with his stake-partners. “Hi. Hi.”

She grinned. “You look different. Tanned. More muscular. I often wondered if you’d tone up.”

He nodded. “I spent year three walking with a Fwolp super-family. I toned up. Since I got back I exercise just enough to stay that way. You look great.”

“I like to prettify for parties. And the dress…” she twirled, did a little shimmy. “Cathy made it. Fits nice. How much Fwol did you learn?”

“I can pray. I can I can ask for food; I can ask for seconds. I can describe land formations for the purposes of scouting. I can ask where the humans are.”

“Most of what I know is about trading.” She sipped her drink. “We get a small group three, four times a year that brings in that grey cotton to exchange for food, textiles. Tools. You know.”

He flushed. “They taught you that?”

“Well, they apparently taught you, didn’t they?”

“They caught Ian and Sarah sneaking off one night. They had to explain themselves”

“Want to sneak off?”

I popped in on the landing halfway up the stairs, looked around, saw the place was empty, and popped back out. Mitch was already there. “Nobody in the entrance hall.”

“Do it.” Mitch popped out, having set his own coordinates while he was talking.

I punched in the numbers he’d given me and hit the button: the basement, as I thought, and a very surprised suspect kneeling over a floor safe. 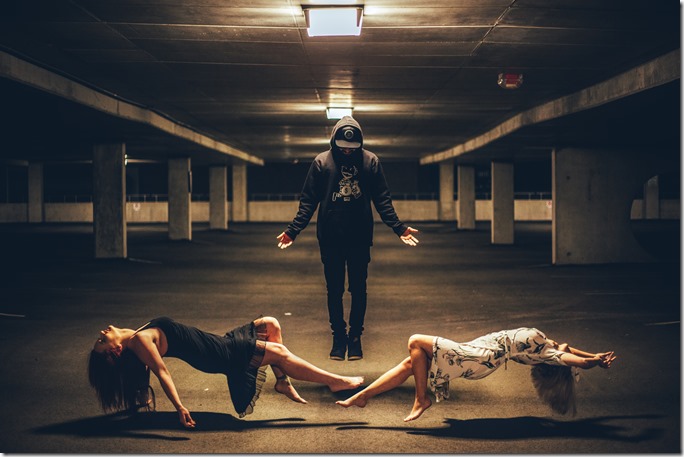 We’d meet in odd places to avoid been seen; the more isolated the better. We’d all spend the week learning a new one, some abjuration or evocation, some enchantment or illusion, and then we’d get together for the weekend ‘show and tell’. Nobody ever got hurt. Nobody ever went too far. Usually it ended with giddy whispers down the pub; only occasionally did it end with furtive sex up at mine or his or hers.

Eventually Lena got religion and gave it up. Only pure divination for her, now, revealed wisdom. Sometimes she calls to say she’s praying for me.

He woke to the weight of her against his hip and chest, of her hand over his mouth. Before his brain could process the noises he was hearing, she whispered into his ear, “Don’t make a fucking sound.”

At dusk they’d climbed up atop an eighteen-wheeler to lay out their sleeping bag; now a herd of undead were shuffling past them down the moonlit highway, an undulating chorus of moans and hisses. They listened, frozen, hearts pounding, until the noises grew few and distant.

Eventually her hand left his mouth, brushed down his chest, came to rest on his crotch.