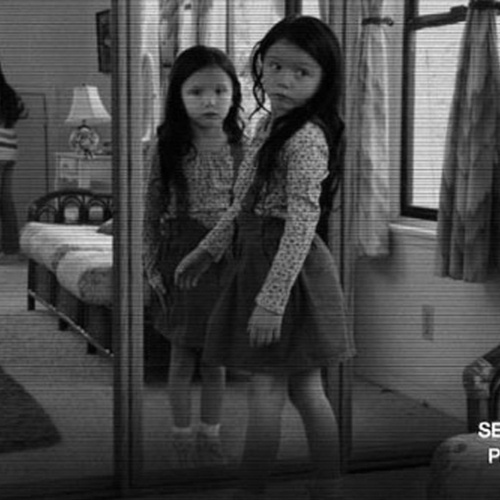 "Mummy, where does the mirror go?"

"What do you mean? It doesn't go anywhere."

"Honey, mummy's on the phone. Be a good girl and go play until dinner."

"I think the me in the mirror is a bad—"

An half an hour later, Christine went looking for her little Clara, and did not find her. It was two hours later, with the Police searching the darkening neighborhood with flashlights, that she noticed the open bedroom door appeared closed in the mirror.

My car accident was a freak. It never happens anymore, not like that. Autopilots hardly ever fail, and there are few sections of road without Guidestripe backups.

Now my brain and part of my nervous system controls a starship. I feel its systems as I once felt my fingers and toes. Oncoming dust striking the magnetic field around the hull tickles my skin. Or it would, if I ever went anywhere. I've been stuck in port for three years. Cutbacks, they say.

I was given a choice between being this and being a paraplegic. I wonder if I chose well.

They always cheer the King. When he comes out, they stand, they wave their little flags, the trumpets blare their fanfares and all is presumed to be well. After that it's up for grabs. They can root against his handpicked favorites all they want, so long as they cheer him.

The favorite that day was a Raiegan brute named Carv. He'd been a soldier, but wanting for discipline, he was eventually sent into the arena. He'd made quite a career of it. Thirty-one times he'd walked out into the sunlight and the sand and the sawdust and then back out again under his own power. This time he'd entered with a longsword, probably enchanted, most assuredly sharp. The King likes success.

I was most definitely not the favorite. I had bedded the King's mistress, Kayla, except we hadn't bothered with the bed. They'd sent me out with a shortsword, no doubt on the King's specific instructions, for the symbolism. That's fine. Kayla knows better.

Carv was never one for ceremony. He came at me like a team of runaway horses.

They cheer the King, and they cheer action. They were expecting me to die quickly. Carv had the sense to draw things out. I'd seen him fight before: he'd wound his opponent early on, and then toy with them until his ears told him the crowd was ready for the end.

I dodged and scampered. I twisted and rolled. The crowd hated me: I wouldn't take it like a man. They began to boo. They chanted Carv's name.

Carv decided the wounding was overdue: he stepped in close, expecting me to run, so he could slash at the backs of my legs. Instead I ducked into his shadow. Carv suddenly found my short sword buried hilt-deep in his chest.

The Crown cannot appear ungracious: the purse was paid. I was released, shown to the East Gate and told never to be seen there again.

I wonder if Kayla misses me.