Whom Heaven, Earth, And Sea Obey 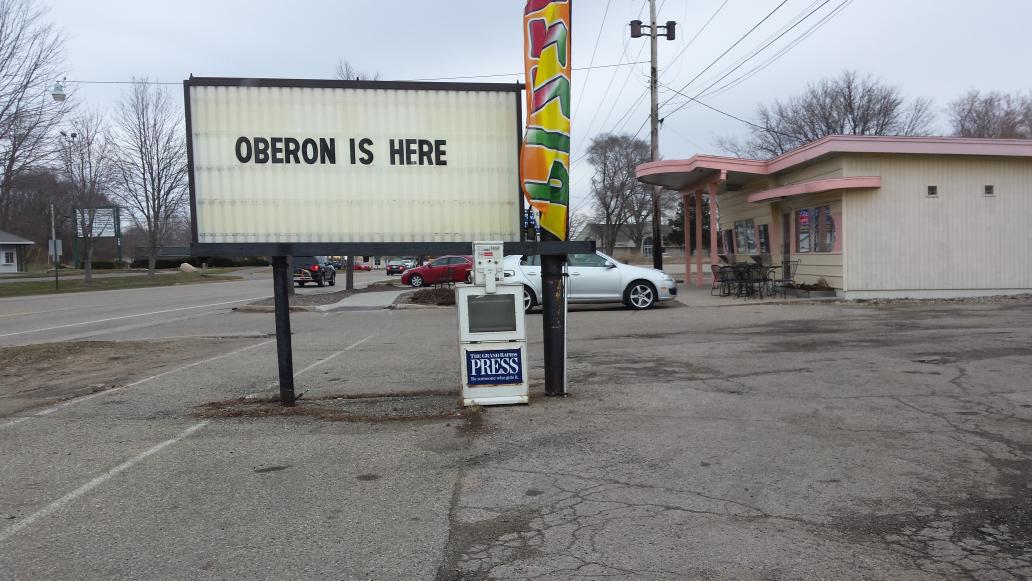 She was the last in line; she'd arrived late, but they'd made an exception. She stepped warily past the immense bodyguard and slid into the booth. She smiled respectfully, she folded her hands, she tried not to make eye contact. Don't speak until—

He'd been staring out the window; he glanced down at his watch before delivering a businesslike "What can I do for you?"

She'd rehearsed it — in the mirror at home, in the car on the drive up from Gary, standing in line  — but she was suddenly vacant, unsure. "Uh…"

"Where are you from?"

"Gary. Just outside of. Like, right between Gary and Hobart?"

"I'll be in Chicago tomorrow, why not wait and see me there?"

"I have to work." She managed to make eye contact, only for a fraction of a second, a guilty, furtive glance. His eyes were a robin egg blue, an arctic blue, with a glow like they were catching the light just so, like

He leaned back against the cushioned seat, head cocked to one side, regarding her. "You have a job."

"You don't like it, though, you wish you did something else?"

"I'm not 'people'." It was an instinctive retort, and she was immediately regretful for the outburst. "Sorry."

"No, no." A smile grew across his face, like he'd decided something, good or bad, like he had an understanding he'd lacked before and nothing she would say from here on out would change it. "What would you rather be doing?"

"I don't know. Just… somewhere else."

He leaned in, arms crossed in front of him on the table. "You know the story of the Faerie Kingdom? Of course you do. You were held in arms and fed it with breast-milk. All your life you've been told it was real, that it was out there, that one day we'd go back there, that we'd have everything we'd ever needed or wanted or imagined."

"Deep down, you think to yourself, 'why hasn't that happened yet? What's the hold-up? Why not now? Why not for me?"

He was giving her speech, the rehearsed one, the one from the mirror, giving it back to her as if he'd been watching her for days, memorizing every word and inflection. "Yes."

"I'm a check-out girl." She locked eyes with him now: no less afraid, but drawn into it, into them. "It's me and eight scanner machines that do the same job. The manager fired seven other girls when he installed the machines. The only reason he picked me is he wants to fuck me; he's said so. The other girls think he already has. They won't speak to me."

Offhandedly, with a shrug: "You should kill him."

Now she leaned in, her voice a hiss of a whisper. "I want to. But then what? Some other checkout job at some other store with some other pig manager? Maybe I could do something even more humiliating. Maybe I could clean their bathrooms; maybe I could answer their phones. Plus having to worry about the police coming—"

She fell silent, leaned back, willed her heartbeat to slow and her breath to calm. He was waiting, eyebrows up, for her to collect herself, and continue; eventually she managed it. "I can put up with a lot, if I know there's something better I'm working towards. Working for. Right now I'm just feeding the enemy. Your enemy."

"You want a commission from your King."

She paused, gathering her will, marshaling her strength. She didn't need to think it through, she'd come with this choice already made. "You are my King. Command me."

The smile returned to his face. He nodded to the bodyguard, who called over a waitress. He didn't need to look at the menu. "Two eggs, scrambled; bacon, hash browns, and an English muffin. And coffee. The same for the young lady."

"Sure." The waitress winked at her before walking off towards the kitchen.

She wasn't hungry; she didn't say so. When the food came, which was almost immediately, she picked at and tasted and and rearranged while he devoured.

He had a mouthful of hash browns when he finally continued. "Here's what you do. Ready?"

"You go home, get a good night's sleep, you go in to work tomorrow, and you kill the pig." He didn't look up from his afternoon breakfast to gauge her reaction. "You don't take a weapon; you beat him to death with your hands, with your fists. It'll feel better. Leave the body in the grocery. Don't worry about making it look like there's been a break-in: they'll see you were scheduled, that you're not dead too, that you're not home, and they'll know it was you. But they won't be able to find you because you'll be in Chicago with me." He took another bite and then added, "Leave your car, you won't need it; take the bus. You know where to meet us?"

"Ever hear of King Canute?"

She shook her head.

"It doesn't matter. Ask yourself this: if the story, the one you were weaned on, the story of the Faerie Kingdom is real—" He looked at her, pointed at her with his fork, bits of egg hanging precariously from the tines "—and I'm not saying it's not. If the story of the Faerie Kingdom is real, and I knew where it was, and how to get us all back there, if I had the power to make it happen, do you think I would be sitting in a diner in Michigan taking audiences?"

"It would already be done, wouldn't it?"

"Don't let it break your heart." He took another bite. "And eat your eggs. You don't want to be hungry on the drive home."

There's something in the forest cutting off people's hands and fixing them to a tree. That's enough, right? Enough to make you head for the car at first light.

For now you're locked in the trailer, you've tied a line from handle to sink so the door can't be opened even if the lock fails, you're clutching the kitchen knife as you huddle in the corner sweating and willing your heartbeat to slow. You're waiting it out, hoping it can't get in, hoping it doesn't even know you're here, didn't hear the car, didn't smell the smoke from the campfire, didn't see you panicked and running through the forest and tripping and falling while you were scrambling towards the safety of the trailer.

But you don't know the worst part, Amy. You've missed it. There's an odd number of hands on the tree. There's thirteen. Where's the fourteenth hand, Amy?

It's A Magical Place It's in one of them: one of these, along this wall. I wish I could remember the color, the width, the first letter of the author's name, anything.  Anything.

Mama read it to me, when I was little, this story set in this place she loved so well, this hamlet with the little cottages and the fishing pier and the band gazebo and the mom-and-pop grocer. She'd close the book at the end and sigh and say, "I'm going to live there someday. Just you wait."

She's there now. She's fine. They don't know what I know. She's not dead. 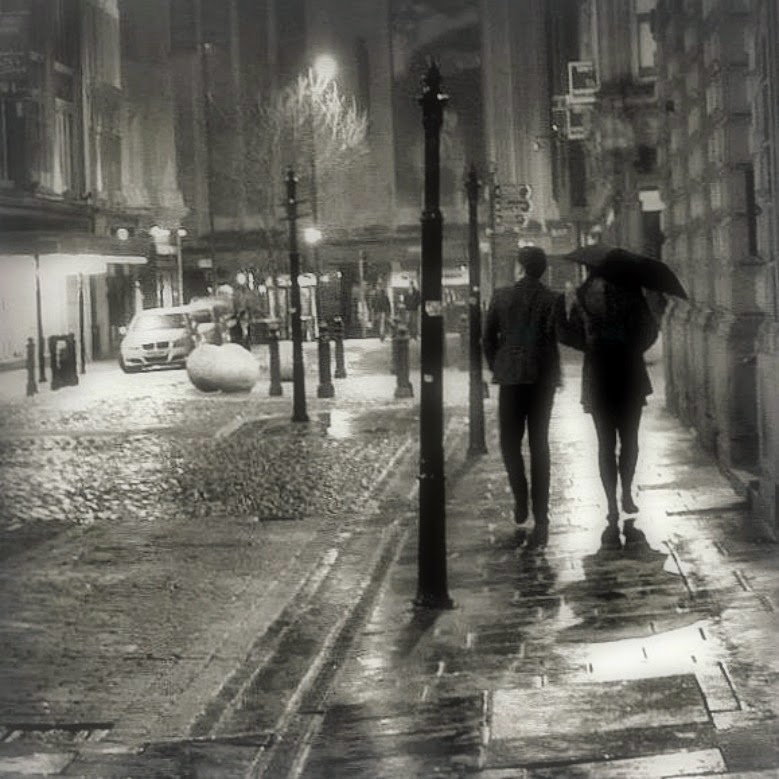 "She was leaving him."

"Wait, what? How do you know that? She never said—"

"It was obvious. There were a million little signs, things she said, things she did. The suitcase in the open front closet had a spotlight on it."

"It did? How do you notice shit like that?"

There was a long silence as they walked through the rain. "Babe?"

"If you're ever unhappy, and you're planning to leave me, just tell me. Because I'm never gonna figure it out on my own."

He wakes a little bit at a time: the tip of the tail twitches; a foreclaw slips from its sheath; the spines on his back slowly raise one by one; his eyelids flutter, one and then the other, and then they open to see the sorcerer standing before him, arms folded, eyebrow raised, waiting.

The sorcerer responded, exasperated, "That's your opening question? Not, 'how did you know I'd be waking now, today, from my sixty-three year nap?', or 'how has the world changed since I've been asleep?', or even 'how did you find this, my secret lair?'."