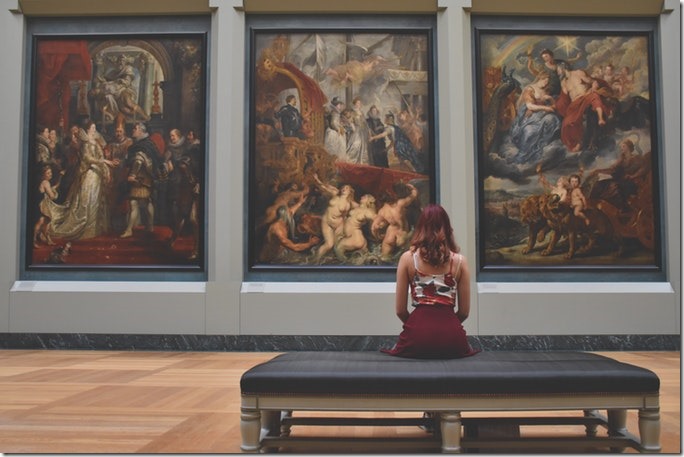 He found her, finally, in the Renaissance. She sat quietly, watching the paintings as if expecting them to change, to move, to speak, to peel themselves open and offer her transport into another time and world. He sat beside her, not too close, just out of the corner of her eye, so she would feel his presence but still ignore him if she chose.

Eventually, she reached out and held his hand. “I don’t like this one.”

“Why?” He knew it wouldn’t be about the painting, not really.

“The Queen isn’t happy. She’s pretending to be, but she isn’t, really.” 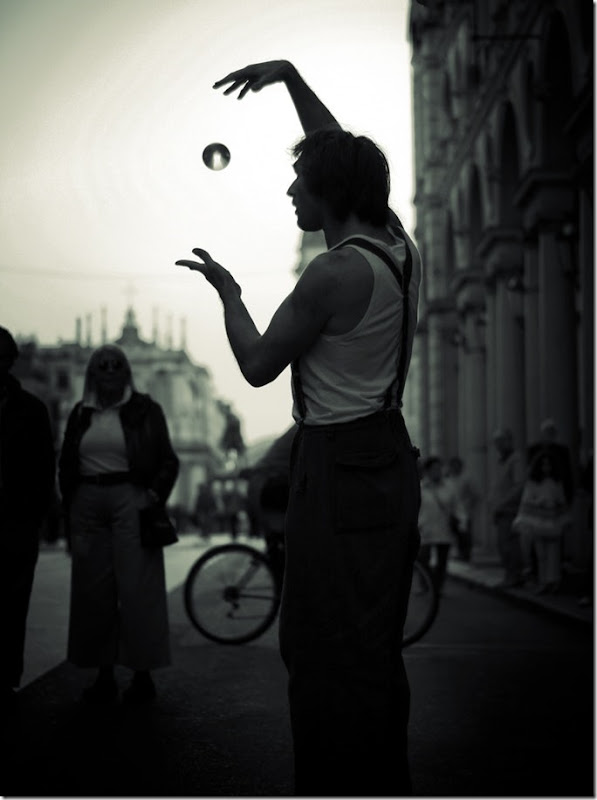 I don’t need the tips; I mostly do it for the practice.

That, and the joy of knowing they think it’s a ‘trick’.

He followed her uphill, struggling, wheezing while she climbed effortlessly. When he reached the top, she was reciting incantations in a language only she could name, much less speak. An ethereal window appeared before her, through which the distant mountains appeared much closer. Between the peaks, he spied movement. “How big are these giants, Holiness?”

Her voice decanted a memory more distant in time than the mountains were over land. “Big enough to trample a man on horseback, and not realize it. Big enough to stand astride the Keep at Nochwallag with both soles flat on the earth.”

Nochwallag Keep was a crumbled ruin, and had been since before he was born. “Is that how it fell?” How old is she?

“It fell from hubris, and too little grain.” She glanced back at him, amused by the look of confusion on his face, and waved the window back into nothingness. “A story for another time. We still have many days walk ahead of us. And then, likely, many days of parlay. Come.”

He followed her down the front of the hill, the guards behind, the porters further still.

“They knew we were coming before we did.” 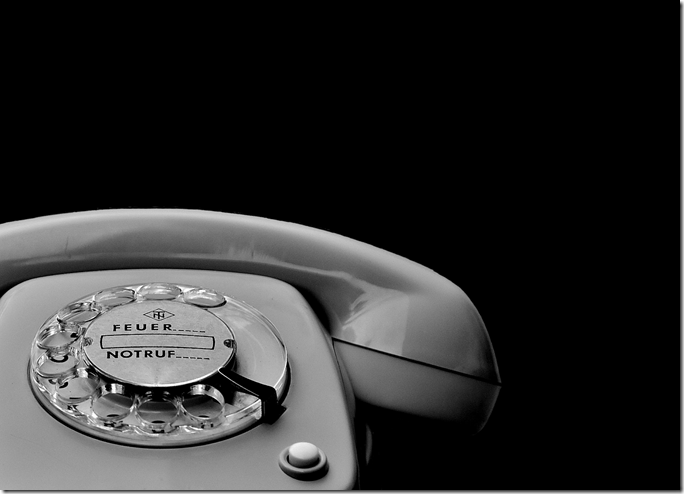 Brraaaang. Brraaaang. A sound he hadn’t heard in years, and only then because nostalgic types would make it their smartphone’s ringtone. He dug the old bakelite relic out of the chest, set it on the dusty attic table, picked up the receiver and held it to his ear. “…Hello?”

The distant, tinny voice on the other end said, “You’re braver than most people.”

“The phone isn’t plugged in. Even if it were plugged in, and you paid for landline service, phones like this won’t work with the new system. So when this phone rings, any reasonable person would be given pause. Wouldn’t you say?”

“But you answered nonetheless.”

“I suppose I did. Was there something you wanted?”

There was a pause. “Well, as I said, it usually doesn’t get this far. I’m afraid you’ve rather thrown me off.”

“Sorry about that.” He switched the receiver to the other ear, held it in place with his shoulder while he straightened his tie. “Would it help if I admitted to being mildly disturbed?”

The voice sighed. “It’ll have to do for now. Hopefully the flickering lights will have more success.”

Now You See Me 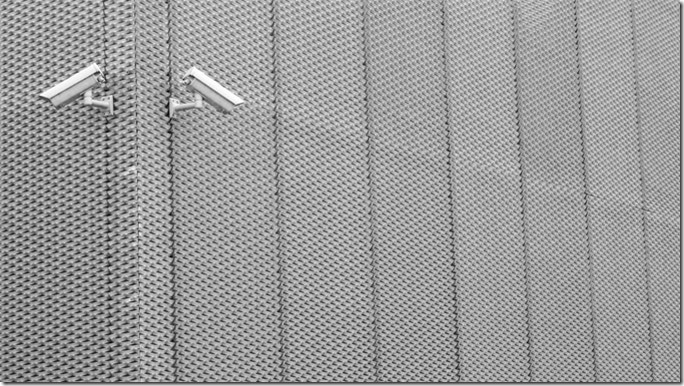 “Clicking now.” She pushed down the activator button with her left thumb and shoved the door open with the palm of her right hand.

She had three minutes. The Fuzzer only held three minutes worth of charge; a second more out there, exposed to cameras and sensors, and her biometrics would be measured, compared against the main database, and every drone within five kilometers would start homing in on her, weapons hot.

“Don’t stop for anything.” Jilly’s voice was nervous in her earbud.

She was already out of the alley and halfway down the block, avoiding eye contact with the few other people on the street. “I've done this a hundred times now, buddy, I don’t need to be told how to—”

“You there! Just a minute.”

An actual, for-real, brick-and-mortar human cop. What were the odds? She ignored the voice. Maybe he’d figure she wasn’t worth the—

He could call down all the drones himself, by touching his badge with whichever of his fingertips he’d registered with the network. She stopped, turned, sighed. Well, that’s just bad luck.

“You dropped this, miss.” He held out something. The Fuzzer! Must have dropped out of my pocket. How long had she been exposed?

“Hey, thanks!” She took it, smiled politely, deferentially, trained by half a lifetime of interactions with people just like him.

“What is that thing, anyway?”

“I keep my music on there.” Barely believable, but she had a face people wanted to trust. It was one reason she’d been chosen.

“You should just use your subcutaneous chip.” He shook his head. “You kids, so distrustful of technology.”

She shrugged. “Thanks again.”

A few steps further down the sidewalk, she whispered, “How much time did I lose?”

“Forty-five seconds; you have seventy seconds left. Could be worse. Why the fuck was there a meat cop out—”

She was almost running at this point, trying to look late for work or in search of a bathroom or anything ordinary. “Who cares. Call out my countdown.”

“Just get inside. I built some wiggle room into the schedule.”

For a month he’d talked about precision, about no room for error, about finding someone who could do this if she couldn’t. “Wiggle room.” If this worked out, if they didn’t get caught, she was going to punch him in the mouth. Her doorway, the goal line, was in sight. “Almost there.”

She hadn’t tripped since the third dry run. She took the steps two at a time, made it to the door, put her wrist against the hacked sensor lock, and, when it buzzed, slipped inside the building.

The windows rattled; somewhere nearby, there had been an explosion. She peered through the slats of the window blinds: the cop was running the other way, towards the incident. With any luck, he would forget about her until the forensic reconstruction interviews, and with good luck, he would forget her even then.

After The East Central Game 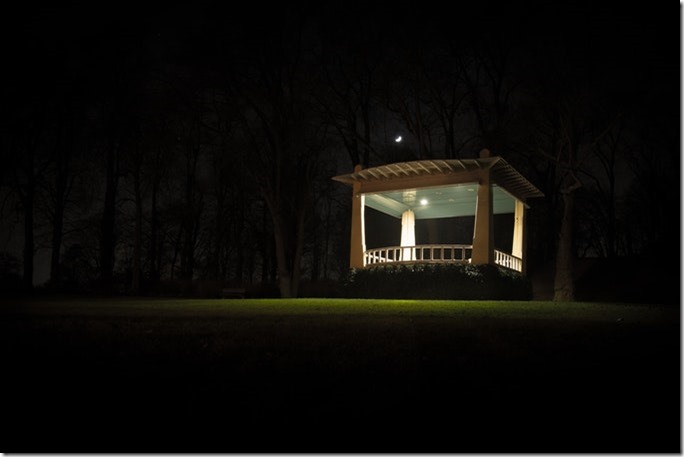 She met him where she was supposed to meet him, where she always met him: an illuminated island in a forest of darkness. “Did you get beer?”

“Only two.” He’d already almost finished one, and the odds were fair to good that they’d end up sharing the other. “Terry kept the rest.”

“Fuck Terry.” She took the second beer, the last beer, and twisted it open in the cinched-up edge of her sweatshirt, and took a long gulp. “If he’s gonna take four out of six he’s gotta pay half. I don’t care if he’s the only one with I.D.”

“I mean, don’t you? If you don’t that’s okay, I guess.” She tilted the beer up again, killing all but a third of it. “I just figured, you know.” 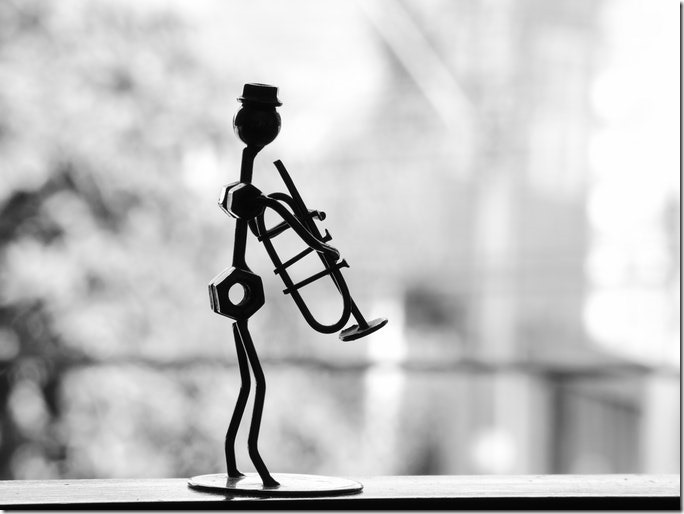 “What are you going to do now,” she sipped her coffee, trying to ignore the pigeons around her feet, trying to pretend there wasn’t a little too much of a chill in the air, trying to seem like it was a casual question, “now that you can’t play?”

He shrugged; he wouldn’t meet her eyes. It was as if he didn’t just not know the answer, but that he believed there wasn’t an answer.

“Can they fix your—”

She stared at the tiny aperture in the coffee cup’s lid. “It doesn’t seem fair.”

He laughed. “Why would it be?”