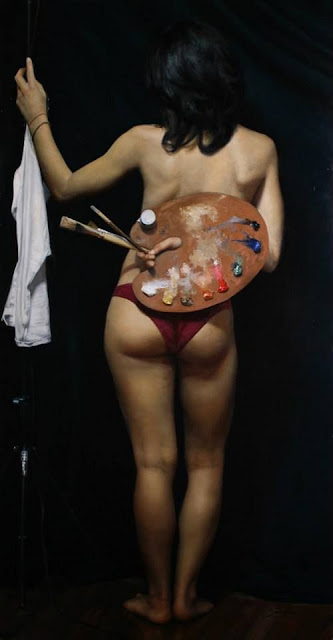 Phone numbers typed on little slips of paper torn from the bottom of flyers thumbtacked to bulletin boards have never once, in all my life, failed me.

Things I did not say to Gloria: “You have a grandma name, what’s that about?”; “You remind me of Katy Perry, especially in the chest.”; “Is this whole art class thing just a way to get people naked so you can get laid without going to frat parties?”; “Can I bring my boyfriend next time, this whole thing is weirding him out?”

She painted me four times over the course of two months. She didn’t take reference pictures and then paint from that. I sat for her, long afternoons bathed in light spilling in through the high-set studio windows. She introduced me to her teacher while I was wrapped in a sheet, which he affected not to notice.

After the third time, she took me for coffee. “I have to stop painting you. I’m attracted sexually and it’s distracting me from the work.”

We agreed that it was best to stop the sessions. We made small talk and finished our coffee and went our separate ways. She showed up at my dorm room five hours later and knocked on it and when I let her in, she kissed me without saying anything.

We dated for six months. She painted me one more time, after that night, but it wasn’t the same; she wasn’t painting me anymore, she was painting this version of me that she loved and fucked and argued and made up with.

I’ve shown my husband those paintings. The last one, the fourth one, is his favorite, I think because that’s the wife in his head. I can’t stand it, myself; I like the third one, because it’s all about unrealized longing.