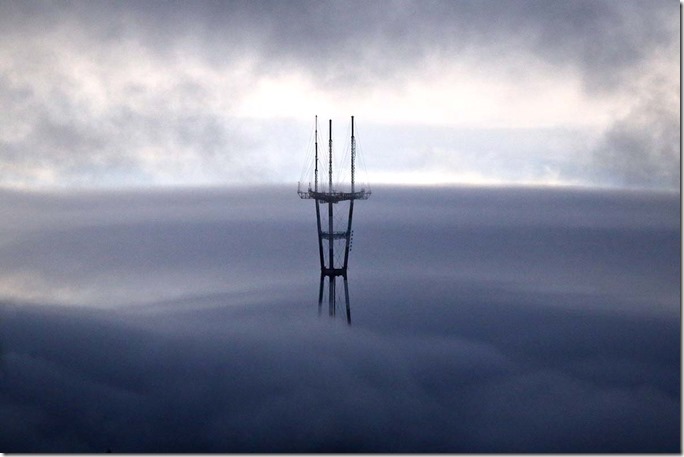 Breakfast, eight in the morning: Mandy received a vision, dropped her glass of orange juice which shattered on the kitchen floor, and Junior cried while his mother stood rigid with her breathing shallow and her eyes rolling back in her head.

We'd been behind the shield array — constructed to protect us from the melon-baller's seemingly indistinguishable-from-magic brain-stealing tech — for a week, waiting for some plan of action to come out from the Boss or for an actionable clue to fall into our lap with no result. Then: Mandy's vision.

It was a long one: before it was over and she could tell me what had happened or was happening or was about to happen, I was dressed and on the intercom to the others. "Suit up."

Mandy came out of it, rubbed her eyes, surveyed me already in my outfit and said: "Sutro Tower. It's Dreadbird. But…"

I was already to the door, but stopped to hear the rest. "But?"

"Something's different. With her, I mean. She's never killed anyone?"

"There's somebody dead there, dead already." She reached for Junior, to pick him up, soothe him. "I don't know who, or where. Maybe more than one."

"Call it in." The others would be half-into their suits now, unless they'd already been wearing them, in which case they'd be headed for the landing pad or the motor pool. Except for Rapture, who'd be waiting in a hover. I slowed enough as I passed her on the headquarters lawn to repeat what Mandy had said, and then we were off.

Rapture's flight mechanic, whatever it is, doesn't make her anywhere near as fast as me. But she's faster than the helicopters, which were still waiting for personnel. I'd get there first, then her, and then suddenly, everybody else. It's what always happens, and I like it that way.

Sutro Tower is an immense red-and-white claw of steel and cable scratching at the sky; at its base lies a squat, brutal building bristling with dishes and other tech. As I approached I counted eighteen, twenty, twenty-two quadcopter drones, man-sized and mean-looking, all orbiting the top of the tower. In the center of their perimeter: Dreadbird, a tiny speck doing I couldn't tell what.

I was circling across broken ground, looking for a good route up to her when the quadcopters started spraying bullets at me. The transmission building was the only real cover nearby, and the front door was propped open, so I headed for it.

I stopped to avoid tripping over the site watchman, laying unmoving on the floor near the entrance, when my head suddenly hurt, as if I had been in the midst of a migraine for hours and was only now noticing it.

My reflexes are fast, as I've told you before. They would have to be, for me to control myself, to move my limbs rapidly enough and at the right times to stay in purposeful motion, to keep from tearing myself apart attempting a change of speed or direction. My nervous system has to be able to produce those impulses and carry them in an ordered manner. I don't know why I don't think fast. Maybe the mutation's limited to my motor cortex or something. Maybe Doctor Chowdhury would know, or D1.

I was moving again before the normal, human, slow part of my brain understood what was happening: someone was trying to steal it, right out of my skull, right then. I went through the doorframe rather than the door, emerging in a cloud of splinters and concrete dust, bullets kicking up dirt ten feed behind me and then twenty and then thirty as I gained speed. I toggled my collar-mic to send a warning to the others before the wind noise made me impossible to understand: "Trap. Stay away."

Somebody was talking to me over me earpiece as I ran, probably Seabring, but I couldn't understand her. It wouldn't have mattered, because I wouldn't have turned back towards Sutro Tower for anything in the world, not for Seabring, not even for the Boss. I didn't stop until I was back at headquarters safely within Dreamland One's protective shield.

I didn't have to, as it turned out D1 had drones of its own. They were the size of small helicopters, wicked fast, and armed with some kind of energy weapon. Where the Boss had been keeping them I had no idea, none of us had ever seen them before. Maybe it had been getting ready for something like this for years without telling anyone; maybe it had built them yesterday.

We watched it happen, gathered around the big screen in the ops room, all of us except for Rapture. She hadn't made it back to base yet, but the others hadn't had time to leave it before being waved off by my message. Dreamland's drones made short work of the bogeys around the tower: they fell smoking in twos and threes every few seconds and it was over within a minute, and the friendlies had only a few bullet-sized dents to show for their troubles.

The guard inside was alive, unconscious, which was odd but welcome. It was Dreadbird who was dead.

"The melon-baller laid a trap, all right, but so did D1." Seabring explained, as we all waited for Chowdhury to emerge from the operating room. "The Boss must have figured the antenna complex would figure into it somehow."

"I have no idea. You try second-guessing a self-aware computer. I don't know what it knows about the melon-baller's tech and what that would imply about what the melon-baller needs. Maybe D1 set traps all over the place, and this is just the one the enemy happened to trigger. But I know one thing..."

Rapture, ever impatient, snapped, "What?"

"The melon-baller's trap? It was for you," Seabring pointed straight at my forehead, "mister 'first responder'. The melon-baller made a play for your brain, specifically. Maybe he would have settled for somebody else, but he tipped his hand right away, and for you."

Chowdhury emerged, shaking his head. "Miss Wang — 'Dreadbird', as you knew her — has been dead for some time, possibly more than a month. The body shows signs of long-term refrigeration. And it appears that her brain was removed, and replaced by the mini-computer, surgically, at the time of death. It was the cause of her death."

"It also appears that her tech implants have been removed, taken apart, some of them modified, and then all re-implanted with their connections extended to join with the mini-computer in the skull. When D1's electro-magnetic spike trap hit the body, the implants conveyed the pulse to the 'brain' and disabled it."

Everybody else was quiet, processing; I was full of adrenaline and anger. "What now?"

Chowdhury shrugged, looked at his watch. "Dreamland One is talking to the mini-computer."

"We have to be patient, this could—"

The alert sounded in the hall, and all of our earpieces beeped. Everyone but me jumped.

"Who the hell sounded the alert?" Seabring asked, looking around for an absent culprit. "We're all right h—"

The building-audible alert sound ended, but over our earpieces came Dreamland One's strange, flat, artificial speaking voice, the one that had ensorcelled us all at our entrance interviews. "I have him. Suit up."