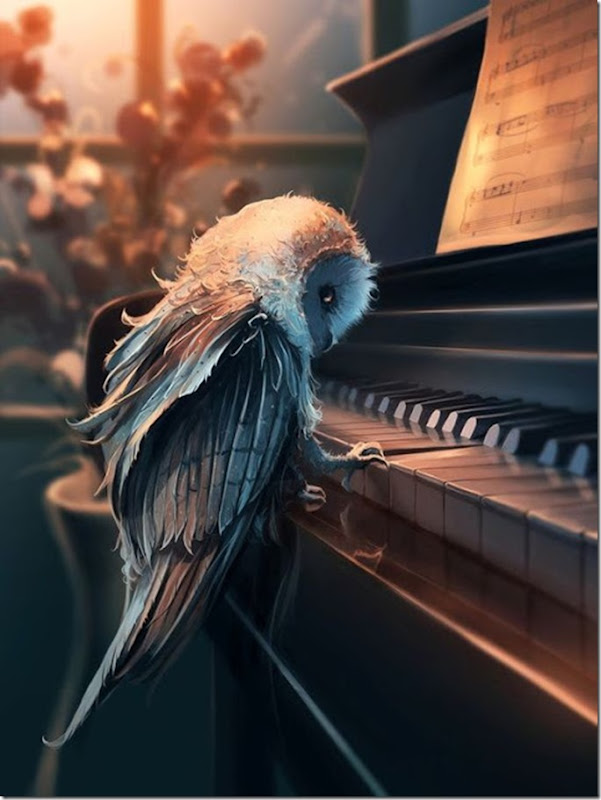 “Do you still remember how to play?”

He turned his face towards her, cocked his head, stared, then turned back and pushed down another key.

Does he even understand me? There was enough flash memory to hold him, at least after the hurried hardware upgrade, but the CPU was still a small one. “Do you remember the Debussy? Or the Stravinsky… ‘The Five Fingers?’

He turned, stared at her again.

“I know, you don’t have enough fingers now.”

He leapt from the edge of the keyboard into the air, flapped his wings, circled the room twice before finally alighting on the windowsill. He didn’t seem to be concerned with the outside, but rather with his own reflection.

“It was the only thing I had anywhere near ready. I’ll have to build a new chassis for you, call in Rémy to do the skin and hair, it’ll take some time.” She tapped the keyboard so the screen would wake, revealing design plans already begun. “Weeks, maybe?”

He didn’t look at the computer. After a moment, he flew back to the piano, slowly pushed down a key, then another.

“I wonder if, when you’re a man again, you’ll remember how to fly.”

Email ThisBlogThis!Share to TwitterShare to FacebookShare to Pinterest
Labels: MidWeekFlash, sf, The 200, The200